The tip of an iceberg

SVT’s news reporters Oskar Jönsson and Kjell Lundström had, three months ago, full time work reviewing the now outgoing Minister Mehmet Kaplan. The materials they have left to publish, according to own data, is extensive. How extensive this material is is going to be crucial to the continued scrutiny and debate.

At the same time, Rashid Musa, chairperson of the Swedish Young Muslims (SUM), and MEP Peter Eriksson (MP) claimed that it was Islamophobic forces that ousted Mehmet Kaplan from the position of housing minister. What Rashid Musa has in common with Keplan is that they both have a part in what is known as the “Ibn Rushd” sphere. Rashid Musa is currently Chairman of SUM, the same organisation that Mehmet Kaplan chaired between 2000-2002. 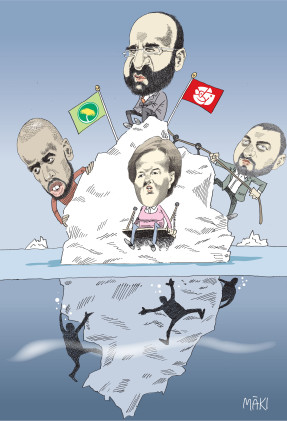 Sweden’s Young Muslims are included in the study association Ibn Rushd where even IFIS, the Islamic Association in Sweden, is a member. IFIS became known in connection with the so-called “Omar Mustafa” – affair. Omar Mustafa became nationally famous when he was forced to choose between his Muslim beliefs and interpretation on one hand and the central points of the Social Democrats’ party platform and ambiguous relation to anti-Semitism on the other. Something he has in common with Mehmet Kaplan. Mustafa left the Social Democratic party after a short time.

IFIS also had another well-known figure holding its chair position; Abdirizak Waberi. Waberi was, during his short time in Parliament for the Conservatives, best known for advocating violence as a method of correction within marriage and other precautions in accordance with Sharia. Such as to not holding hands with women, to take one example.

The “Ibn Rushd” sphere is characterised by a strong economy, financed by tax revenue, as well as an extensive personal network. The same names recur in the various constituent associations’ boards and many change seats with each other through the years. Musa is one of Kaplan’s successor in the same manner as Omar Mustafa took over after Abdirizak Waberi.

Common to these four representatives of Islam is that they all say that there is only one Islam; their Sunni Islam. Questioning of their version of Islam is Islamophobia. Other Muslim representatives, such as Ardalan Shekarabi, Hannah Gadban and Kurdo Baksi share the same interpretation but do not react in the same way as, for example, Mehmet Kaplan or Omar Mustafa when the organisation’s values are criticised.

Although Mehmet Kaplan has now resigned, his links with the Social Democrats remain. Musa lectures on Islamophobia for SSU periodically, lately on 14 January this year. And there are more connections. Nalin Pekgul, a well-known critic of the whole “Ibn Rushd” sphere and advocate for the modernisation of Islam in the Swedish context, lost her re-election as chairperson of S-women to Lena Sommestad. Sommestad’s campaign was managed by Sara Gunnerud, author of “Ordets makt i politiken ” (The power of the word in politics). Gunnerud has a position in the S-Women association today as a member of the committee. Gunnerud is also currently the communications manager for the study association Ibn Rushd and editor of the member magazine Kupolen.

The same study organisation that, as well as Nalin Pekgul, Kurdo Baksi has been openly critical of. The educational association that organises the most and claims to represent the “One Islam”, which is not the same as including Shiites, Alawites, Alewiter or other parts of this world religion.

Waberi, Kaplan and Mustafa may be out of politics today. But ties remain. And any criticism of anyone in the “Ibn Rushd” sphere is Islamophobia in a way that any other criticism of Muslim representatives is not. Here steps in Aida Hadzialic, school minister and a Bosnian Muslim, who moves away from identity politics and works for everyone’s benefit equally. She has successfully been able to keep her distance from both racism and anti-Semitism. The same is valid for the civil Minister Ardalan Shekarabi. There are no sings on the Internet of anything that comes close to this.

An additional consideration is the Social Democrats’ complicated relationship with the mosque in Vivalla. This mosque has been the base for a vocal school organised by the party secretary Carin Jämtin’s closest colleague Alaa Idris. From the same environment, several members have gone down to Syria to make “Jihad”. Idris is currently one of the Social Democrats’ most powerful officials; organisational secretary in charge of the party’s work with the organisation and statutes.

Mustafa and Kaplan are now gone from party politics. But the band is very much left as well as other bands. What we see is only the tip of an iceberg of a power struggle that has nothing to do with Islamophobia. It’s a battle of who, and to what degree of orthodoxy, is to represent all Muslims in Sweden and bring the religious values to the political system.

Ledarsidorna.se is funded through donations. All contributions, small as well as bigger, is important to maintain and develop the concept. More regular translations is one of the routines we are developing. You will find alternatives below and in the right hand column.

I am truly grateful for your help.