This far, but no further

When Professor Mattias Gardell in 2009 criticized the report “Threats to democracy and values”, which the minster for democracy, Nyamko Sabuni, ordered regarding Rosengård (a suburb of Malmö with a high immigrant population), he criticized it in strong terms. Large parts of the identity politics of the Left was criticised but now, unfortunately, the report essentially has been shown to be completely accurate. Mattias Gardell holds one of Sweden’s most prestigious professorships, the Söderblom professorship at Uppsala University. Even with Mona Sahlin, the National Coordinator, the tone is different from that of two years ago. On the Swedish Radio show “Studio One”, when I debated with her, she was more interested in giving support to mothers when their sons, in one way or another, rebelled.

A number of commentators are now, after years of being sneered at, shown to be right. After an extensive smear campaign from the “identity left” and liberals. Despite the Internet, it is the international experience that the development of extremism or sectarianism occurs locally. It needs focal points and a recruitment base. In the Swedish context, Marcus Brixskiöld has expressed this best. Recruitment managers need an area to act within. Regardless if it is the left, right or religious extremism. The area is mainly geographical, such as a Mosque in Vivalla or no-go zones or garage mosques, but can also be virtual – as a place of debate on the Internet. The latter is more for inspiration.

In the case of the Islamist extremist movements, there is more to say. I had the privilege of spending almost four days with one of Lebanon’s most heavily decorated war heroes. He said something that only Magnus Norell succeeded in formulating in the book “The Caliphate Return”:

“You in Europe have a fundamental problem when you attack Daesh / IS. Today it is said that you fight IS and Boko Haram to take one example. Fifteen years ago, the names of the monster were Al Qaeda, AQIM, Al-Shabaab and a number of others. You attack an organization that changes shape and composition, you do not attack the ideas that nourishes it. We have 90 years of experience in the latter if we’re talking modern times. And you can of course see how my country looks now. “

“Allah is our objective; The Prophet is our leader; The Koran is our law; Jihad is our way; and death for the glory of Allah is our highest aspiration. “ 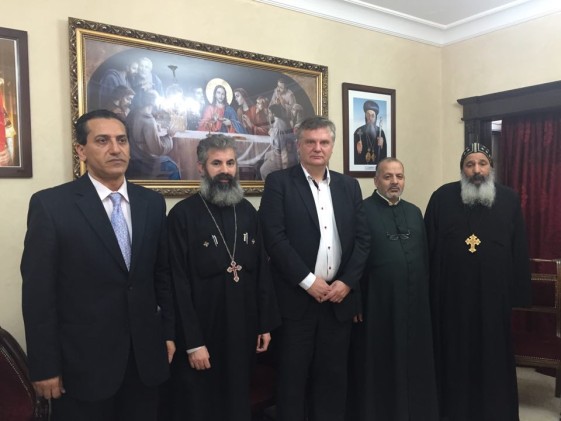 Meeting with senior representatives from the Coptic Church in Beirut. Photo: own

The Brotherhood’s brutality is known when they act on their own, as in Egypt, but they usually act by proxy. Hamas, which controls the the Gaza Strip, sees the Brotherhood as its ideological base according to its own constitution, is an example of an organisation they use as a representative. Some other important lessons this country learned is that the Brotherhood, or derivatives of it, is not a party to negotiate with.

Ikhwan, the Brotherhood, does not want to negotiate and will see every concession the opposition party makes in a negotiation as a sign of weakness and decadence. Coexistence with other beliefs is not an option.

They despise weakness. Concessions, everything from separate bathing times or exceptions from the ban on the headscarf for different occupational groups, is see as a confirmation of “the infidels” decadence and weakness. The Swedish “Dawa movement” as described by Hannah Gadban in the book “My Jihad” is an example of a closely associated ideology. It is, thus, no coincidence that many of the Brotherhood are found among the IS top ranks today or several Dawa mosques have members who openly show sympathies for IS.

What we see today in the media is a herd mentality. An arrest here, an attack there causing all to start running in the same direction. Few have started working on paying attention to what links the local extremist to the organisations which now represent the biggest threat; the ideology behind them. Those who do this, dare to debate or actively work to highlight the Ikhwan, or Brotherhood, openly have all been silenced by a smear campaign in different ways.

The Brotherhood’s beliefs, and brutality, is widely known in the Middle East. How they work purposefully at all levels. Everything from forced head covering and separate bathing times to brutal violence. Everything depends on the “market” or what country they are active in. Morocco and Lebanon are the two countries that have made the most progress in efforts to defuse this bomb. They have chosen, given their history, some different roads but now look as if they will end up with the same solution. A combination of repressive measures and challenging the ideological driving forces. Both countries focus on this combination. Both have practical experience that the way that Europe, and especially Sweden, has chosen – the way of leniency – is not feasible.

Now, Sweden is at a crossroads. Are we to continue down the leniency road in the greater or lesser extent. Or are we going to draw a line in the sand and say “this far, but no further” and, consequently, make a stand.