We can call her D. Her parents fled to Sweden during the late 1980s. She was born in Sweden and lives in one of Stockholm’s most segregated environment. She sits opposite me wearing a baseball cap, hooded jacket and long baggy trousers. Despite the heat. Spring in the air and it is maybe twenty degrees. She describes her everyday life. Her Sweden.

The harassment from the increasingly radical gangs. Wannabes. A twisted, strange home carved out by ultra-orthodox Islam, forcing especially women, regardless of religion or age, to be completely covered. They usually stand and wait for her when she goes to work to make sure she does not show any bare skin. She has long since stopped going out by herself with her girlfriends. Unaccompanied women will not be tolerated. She says to me;

“My parents fled from religious oppression to Sweden to seek protection. Now I, my husband and our two children want to flee to Sweden. But we are stuck here. Why cannot Sweden come and save us? “

It will never happen, she knows it. A sigh of resignation. A tear in the corner of her eye. She is part of the “second generation”. She, her husband and her children carry a foreign surname which is difficult to pronounce. She speaks broken Swedish and has a lower education than ethnic Swedes. She is condemned to remain in an area where the fire department fears to go without an escort. One of those fourteen to fifteen areas that are close to being abandoned. Throwing stones and firebombs is now common. During weekends cars are set on fire. D is stuck with her family. Sweden will not come and rescue them. D confirms the impression that the now hard stigmatized suburban feminists describe. Girlfriends who were married off at a young age and then disappear for good during a summer vacation. Passive or frightened teachers and social workers who have seen the signs but who know they can do nothing. The clans, down to the individual level, which do not want to follow Swedish society’s basic values have learned the magic word so they can apply their honour culture of peace. They just screams 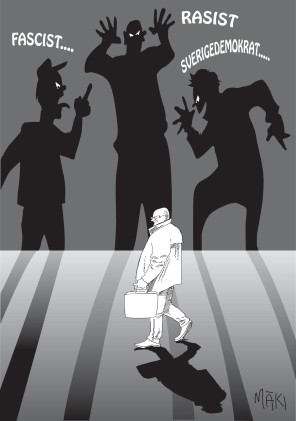 Those wannabes, they want to develop a parallel society. They are masters at playing the racist card. If this fails, they can always point to Sweden’s debt in the transatlantic colonial slave trade to silence all criticism. And they have powerful friends high up in politics. Who look away at the removal of underage girls for polygamy. Expressing surprise that so many teenage girls in one block seem to fall down from balconies when they started their process of emancipation at puberty.

Those wannabes, screaming racist at everything and everybody from their basement mosques that preaches a radical form of Islam that is close to the Muslim Brotherhood, when they have burned up the likely excuses while converts and Arabic-speaking Christians fear for their lives. In Sweden.

Social Democrats for Faith and Solidarity, under the name of Brotherhood, signed in 1999 an agreement with the Swedish Muslim Council, SMR. The report shows clearly that SMR wants a parallel society. Private schools are a particular topic.

“As for issues related to school and day-care, it’s important that the discussion now moves on so that the social democrats reluctance to support independent schools does not negatively colour the question of how Muslims choose to manage their integration and identity”.

The Social democrats have partly created the basis for a parallel society, despite the beautiful words to the contrary. The agreement shows that Faith and Solidarity undertakes to act to legislate on Muslim holidays or to bring them into wage negotiations. Halal slaughter is another area. A parallel society. There are other examples. After a seven-year process, the Supreme Court has decided to examine whether Swedish or Iranian law is applicable to the so-called mahr – an Islamic marriage contract. Mahr is not in the Swedish Marriage Code. But it will now be tested in a Swedish court.

I and D return to the discussion. The sun is shining; spring in the air as she sits in her full dress. She sighs resignedly. She no longer believe in either Stefan Löfven, Jonas Sjöstedt and Anna Kinberg Batra. She asks, whispering, right out into the air to the eyes and ears that do not listen, nor see nor are even present:

A community. Or two. How do you want it? I do not want it this way. I want to go to Sweden.