Tomorrow, the European Commission is expected to propose abolishing visa requirements for 80 million Turkish citizens. But several EU countries warns it could lead to mass migration. A special clause was introduced that gave the EU the right to temporarily reintroduce visas if the rules were abused. Germany and France go even further and introduce an emergency clause that gives each EU country the right to abolish the visa-free concession for six months if the number of asylum seekers reaches a certain level or if Turkish citizens remain illegally in the EU.

There is, today, no confidence in Turkey nor its President, Recep Erdogan, to honor its part of the agreement, while it is not only Germany and France that fear a large proportion of Turkish citizens will choose to stay illegally in the EU. 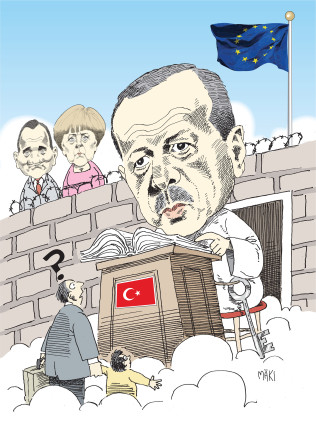 Preparations for a broken contract is ongoing at multiple levels. Angela Merkel prepares both restrictions on the welfare system for foreign born immigrants as well as the possibility of establishing safe zones in Syria. Something both the UN and President Obama oppose but, at the same time, the EU, Turkey and countries like Lebanon probably have no choice but to proceed with the proposal.

Turkey currently has 2.7 million refugees from primarily Syria. Lebanon, itself torn by a long and bloody civil war combined with an occupation, is hosting 1.6 million refugees from Syria. Syrians and Palestinians are not well liked as the two either occupied or otherwise abused this country recently.

Syrian troops left the Bekaa Valley in 2005. The occupation is fresh in the minds of most Lebanese, now the former occupiers and rapists are back, begging for protection and money.

It is as if a rapist would seek out his victim and ask for food and accommodation for humanitarian reasons afterwards.

During my trip to Lebanon, it became apparent how fragile the peace is. My hosts, in particular, all noted that since the Swedish Minister for Migration and especially the Green Party seemed so fond of all these Syrians, we could take a half a million on board. They could even, although they themselves are war-torn and poor, pay for the travel expenses. My hosts in Lebanon were, and are, very familiar with Swedish domestic politics.

Although Syria today is torn by violence, currently, however, it is far from all of Syria that is war torn. Large areas are intact and many of those who fled are returning after they received their permanent residence permits form the EU. Sources at the Swedish Embassy in Amman have testified to this. Syrians come to the embassy to extend their Swedish travel documents. In practice, the whole stretch of coast line on the Mediterranean sea and large parts of central and southern Syria are intact.

There are good reasons, like Merkel, to consider a plan B that can hold for the long-term better than the current hostage situation with Turkey. Erdogan may choose, if he’s in the mood, to turn on the tap again at any time.