Perhaps, after the attacks in Paris, we should start talking about anti-Islamism instead of Islamophobia. The term Islamophobia prevents any sensible discussion, making it somewhat slippery and obscene. But an anti-Islamist stance draws the line between democrats and anti-democrats and makes it necessary to discuss policies and values, writes Lars Åberg, journalist and author, Gothenburg Post newspaper, in early 2015. Åberg’s article was one, maybe two, years ahead of its time. But now it is painfully highly topical.

Åberg points to the Cairo Declaration. In 1990 the foreign ministers of 57 countries, which call themselves Muslim, wrote a joint document, the Cairo Declaration, according to which the divine law, the Sharia, trumps all national legislation. Through the UN, the said States have since then tried to get the world to adopt blasphemy clauses that will make it impossible for discussion, criticism or satire of religion, with the implication in the Cairo Declaration that Islam shall be interpreted in accordance with Sharia. Another, not insignificant detail, that distinguishes the Cairo Declaration from the European Convention on Human Rights and the UN Declaration is the view of people and society. The family, not the individual person, is the smallest building block of society and the Declaration states that the man is the head. According to the sixth article, to take one example, it is the man who is responsible for the family’s livelihood. The full declaration refers constantly to the Sharia, however what is unclear is what form, when there are at least six different orthodox interpretations, the four Sunni and two Shiite, ranging from Hanbalism’s Salafism to the more liberal-Maliki interpretation applied in Morocco.

At the same time, we can examine part of a report on Swedish TV. About a third of all those seeking asylum in Sweden are women. In lodgings across the country, where people are awaiting a decision on residence permits, the majority are men. The women say, not surprisingly, they feel vulnerable. For several reasons. The women Ledarsidorna.se have been in contact with state the “universal”, that lonely men have a tendency over time to be interested in sexual intercourse. Additionally, disturbingly many express their cultural attitude of what they expect from women. Primarily that women refugees are “outlaws” as they have left their husband but also express comments on dress, behavior, and other things that are directly related to Sharia. 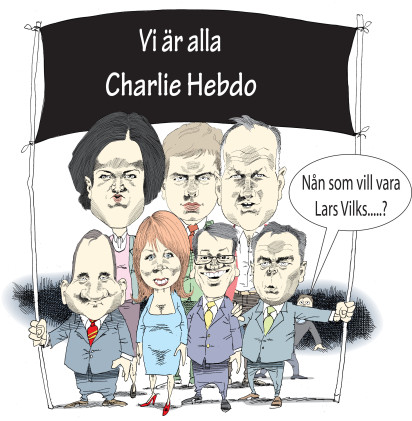 Another example is freedom of expression. According to the Islamic Human Rights the Charlie Hebdo satirical drawings are a violation that can – and should – be punished. Even a person, such as Hanna Gadbans, questioning the different applications and traditions within Islam is punishable when it contradicts various forms of Sharia practice. Sharia is above all laws, including the Muslim Human Rights according to what is written in it.

But there is something missing in all of this. Islam’s structure does not lead to a legally secure application if we would accept everything that is in the Muslim Human Rights.

In the Swedish context, we can see how it works. In the “Manifesto for Muslim Social Democrats” we can read the following:

We believe that all people should have the freedom to choose their own life and the right to their religious beliefs and practices, in accordance with our democratically decided laws. It is only in respect for each other’s life choices that we can get a real sense of freedom and justice in society.

The manifesto omits the things we are used to in a secular state. The fundamental gender equality and LGBT rights. The manifesto is a logical consequence of the Muslim Human Rights. Omar Mustafa, vice-director of the study association Ibn Rushd, had to leave the Social Democratic party, among other things, for his ambiguous stance in relation to what the party saw as universal LGBT rights.

Another problem is that there is not one Islam with one application. Those who claim that there is only one Islam are often the most radical and orthodox. Who want to see their Islam as the only one.

There are thousands because Islam is the most fragmented of the Abrahamic religions. What human rights are applied to the individual as defined by the clan, or the local imam, who makes his specific interpretation. In Saudi Arabia cruel corporal punishment can be used, in accordance with the Sharia and with the support of the Cairo Declaration, in which Sharia is superior. Morocco, with its more secular and more open and European-influenced tradition, lacks legal support for corporal punishment.

Now when we step into the emotional sauce, we need to decide for which universal human rights we are for and what should characterise Sweden.

We must decide how we relate in the future to that that we have taken for granted such as free speech, freedom of religion and equality. If gender equality is a manifestation of racism when it violates the Muslim Human Rights which gives men a special position. We have to decide on the fundamental values such as how state subsidies to religious communities and public education shall be paid. If it is reasonable that public money goes to communities, associations and educational associations that hold values such as the Muslim Human Rights higher than the UN and the EU equivalent. This will require that we examine ourselves, where we ourselves stand.