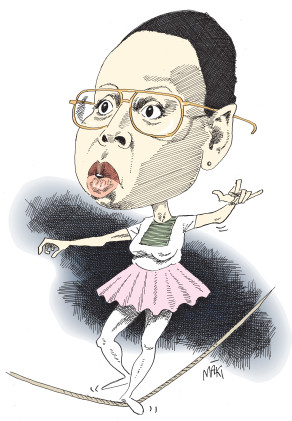 Sports men and the minister Alice Bah Kuhnke constantly want to be at the limit of their ability writes Focus in a portrait that can be likened to a “feel-good” story from 9 May. In this week’s issue (only in the printed edition) the magazine carried something similar with an interview with the President of the Swedish Young Muslims, SUM, Rashid Musa.

Musa says that in practice all criticism of Islam is based on Islamophobia and that he is “tired of having to distance himself” from IS / DAESH.

– Then it was right to join al-Shabaab, a youth branch of the Islamic Courts Union, whose main aim was to oust Ethiopian troops. Those who did so were heroes.

– It is not strange that they chose to do this while Swedish young men and women choose to become soldiers in Afghanistan.

That Al-Shabab later developed into an actual terror organisation, which has now lost the support of the Swedish-Somalis, is another thing, he says. A similar position that he, along with former minister of Housing Mehmet Kaplan made in Almedalen as late as 2014, when IS / DAESH began to grow in strength. The subject of travelling jihadists was reduced to a marginal problem. Mr Kaplan had to resign due to the same fuzzy border in the relationship with the Turkish AKP and other Turkish national movements such as the Grey Wolfes.

Berzengi had been convicted in 2005 for having collected around a million kronor for Islamist terrorists in Iraq. Similarly, Munir Awad was sentenced in 2012 to twelve years in prison in Denmark after having planned a terrorist attack against the Jyllands-Posten.

SUM, MMRK, the more famous IFIS, Islamic Association in Sweden but also the Swedish Muslims for Peace and Justice. Various organisations but in practice the same circle of people behind them. Or who succeeded each other over the years in each board. This Ledarsidorna.se has described in the article “Fördröjningsstrid” (in Swedish but Google translate should work) for those who are more interested in how this works. All the connections to each other in what can be called the “Ibn Rushd – sphere”. This sphere is the sphere that Alice Bah Kuhnke has known very well since her time as Director General of the Youth Board and represents her power base. She knows these people, who time and again seem to make substandard background checks on their speakers or presenters, very well. They all have the Minister’s ear. As late as 2015 they were all invited by the Minister at the same time, which you can see from the embedded document below.

Bah Kuhnkes story does not end at her time on the Youth Board. From the founding of the independent think tank, Sector 3, financed by, among other things COOP, Fonus and other parts of the Workers Movement in Sweden, she developed the business, in practice, with the sole aim to provide the Ibn Rushd – sphere another platform. Nothing is left on the Internet, all the tracks are erased today, if you are not looking for the “old-web” and the old cache – memories where some of the activities still remain. Bah Kuhnke resigned from Sector 3 in 2013 after, according to reliable sources, some Board members finally pulled the handbrake when they considered that Bah Kuhnke had developed Sector 3 in the wrong direction. Bah Kuhnke chose to resign in order to move on to the Swedish engineering and consulting company Ångpanneföreningen (ÅF).

Ledarsidorna.se have spent a week trying to get the investigation directives Bah Kuhnke presented as factual at the DN Debate on 1 June. The registry at the Ministry of Culture has not found any public document that could cover this area. In the article, she makes it clear that taxpayer’s money should not go to hate rhetoric and polarisation.

How these investigation directives look like, or will be designed, is of the public interest. In any case, for those who believe that taxpayer’s money should not be distributed to organisations that engage hate preachers or otherwise polarise society and feed extremism.

Bah Kuhnke is now balancing on a tightrope between ensuring these organisations’ receive grants of common taxpayer’s money with therequirements that the government is serious about dealing with the invitations of various hate preachers or organisations that do not take the radicalisation of Islam seriously.

However, it is reasonable to assume that Bah Kuhnke is expected to be loyal to all those that have for nearly a decade supported her and represent her power base, she so far ensuring that the taxpayer’s money will return to them.