What does it take to recognize a genocide?

What is needed for the Swedish parliament and the government to recognise genocide? The question was asked after the Swedish parliament voted down a proposal to classify IS persecution of Arabic-speaking Christians as genocide. In the debate before the vote the Green Party refused to even touch the subject, but chose to talk about the Middle East as a whole.

The fact that the Green Party has the most difficulty of all the parties to keep their distance from radical Islamists is now obvious. Draft legislation and investigation guidelines are delayed, and everything that happens within cultural policy and part of the education policy of the government is “owned” by the Green Party. Such a division is why it is no coincidence that there is large funding awarded to organisations with dubious links to jihadism through MUCF. MUCF happens to be one of the Minister ov Culture´s s earlier employers. It is the Green Party who simply protects their policy and do not allow any interference in accordance with the agreement between the government parties.

How the Green Party, and thus the government, now choose to respond to the UN report, which classifies IS / DAESH persecution of Yazidis as genocide will be interesting to follow. Yazidis is an early “spin-off” of Islam which chose to move in a different direction as early as the 9th century. They are considered by both IS / DAESH and the Muslim Brotherhood to be heretics. Heretics are, according to their interpretation of the Koran, condemn to death. IS / DAESH see Yazidis as devil worshippers.

I met one of the survivors myself, Nadia Murad, when she was in Stockholm. The girl who survived. I had the privilege to meet her as GAPF ambassador when she was in Sweden at the beginning of the year. She otherwise lives under the protection of the German Government. IS / DAESH also has close ties to the Muslim Brotherhood. Both ideologically and practically. A brotherhood that most of all the Green Party has a positive relationship with, but also one fostered by the Social Democrats association for Faith and Solidarity. Brotherhood theological platform constitutes Hamas’ ideological branch. 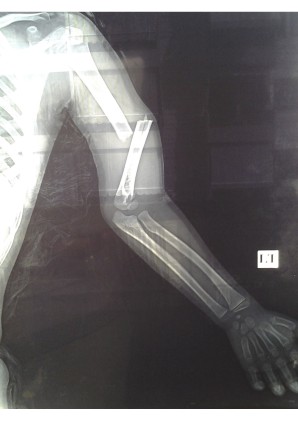 Photograph: X-ray from a hospital in the eastern Mediterranean. The boy was only seven years old when representatives of the Muslim Brotherhood attacked him.

To the right, you can see an X-ray showing what kind of business cards the Muslim Brotherhood left behind with a seven-year-old boy whose father had converted to the Coptic Church. I choose, for several obvious reasons, not to publish the rest of the injuries that these holy men inflicted on the little boy. Or those of his siblings and parents. Partly for reasons of integrity, but also to spare the reader. For the same reason I will not say where I met them, their security is ensured as they are hidden. Everything because their father converted. These injuries, and others, his sons suffered after they were forced to see their mother being raped and his father tortured for hours.

I myself have met with the family for hours. Listened to their stories, seen the scars of their injuries, some for life, heard the concern in their voices and seen the fear in their eyes. This family is far from alone in its relationship with the Muslim Brotherhood. I have met several who share their situation. Converts, and even Muslim liberal critics, risk their lives often if they stand up and fight against the Brotherhood.

Today the family has UNHCR quota refugees status with protective passports but are stuck in a Middle Eastern country after Sweden and elsewhere have rewarded asylum seekers, with different origins and motives, and their relatives, before those with real and well documented need for protection. The government, mainly Morgan Johansson, has been forced to retreat from the question, but it does not help this little family. Terrorists can, with some ease, get to Sweden through Europe. Some get caught, but far from all, as it turns out.

The word “asylum” opened the gateway for a short time to a land of milk and honey for the famous IS member who sought asylum in Sweden after arriving in Malmö and although he was rejected almost immediately it shows the problem of the coarse mesh and the lax attitude we have shown to extreme organisations.

The Copts who I met in Egypt and Libya all dream of being able to get to Sweden to seek asylum and receive protection from threats made by these forces, but the door is unfortunately closed. The Minister of Migration, Morgan Johansson (S), now backs away from his previous position to priorities immigrant family members which is why this family, every day fearing for their life, maybe one day might get protection in Sweden. If they survive waiting. If Sweden now really is a safe a country any more.

For the question is; how much protection would they actually get. The state has granted 535 200 SEK (60 000 USD) to the criticised Sweden Muslims Union (SFM). The organisation, which is associated with extremism and hatred of homosexuals, is to use tax money to combat racism and intolerance. SFM has previously received a grant funded by the taxpayer. 2015 the association was the focus of SVT’s “Mission Review”. The program described how preachers and lecturers engaged by SFM had expressed support for the terrorist groups IS and al-Qaeda.

One of these featured was the extremist Michael Skråmo, who called for terrorist attacks in Sweden. It is no secret now that Arabic-speaking Christians experiencing persecution and harassment resulting from their interpretation of the Quran. And the persecution continues, even in the countries they fled to. The British newspaper, the Express, reports on this phenomenon that we see in practically throughout Europe. In Germany, the number of crimes with anti-Semitic overtones, which right-wing extremist motivation, dominate yet the number of crimes committed by Arabic-speaking Semites have greatly increases according to the German Ministry of Research and Information on anti-Semitism. In 2015, anti-Semitic crimes increased by 34 percent just in Berlin.

France also reports a growing anti-Semitism. Europe, city by city, is now being emptied of Jews. Paris, but perhaps primarily the Swedish city Malmö where the Palestinian Diaspora is strong, will soon be “juden-frei” if the emigration rate continues as it is today. And it is not right-wing extremists they are fleeing from. Many are forced to flee to Israel which is located in the heart of the storm with the same 1400-year-old conflict behind them. A conflict that neither the government nor the opposition dares to address at home. On the contrary, any criticism of the more aggressive party in Sweden is regarded as racism.

The government, and a crippled opposition, should earn the merciless criticism for the negligence with which they have handled these issues during the last ten to fifteen years. Neither IS / DAESH nor the Muslim Brotherhood could be representative of Islam but despite that millions are awarded each year, without checks, to the Swedish organisations that have blurred boundaries with Nadia Murad and many assassins of several people’s life. Today we can see how the government shuts down and blames the Alliance and an Alliance that barks at the government while they do their best to hide their own shortcomings.

Some checks for grants distribution and organisation, or opportunities to even withdraw them retroactively, is not something that there is a decision for at the present. For obvious reasons. The issue is dealt with in essence by the Ministry of Culture and the Ministry of Education. Which is mainly controlled by the Green Party.

What does it take to recognise a genocide? What is necessary for the Swedish and European opposition to begin to act with force? How will Sweden act in the UN Security Council, if we could get there, when these issues come up? Whose side will our ambassador be on in such cases? Why will the Muslim Brotherhood and its Swedish connections not come under the authorities’ scrutiny and nor debate time and time again? How do Sweden act in the European Council in these particular questions?

There are many questions, the answers are few. Far too few.

In the Autumn, I will again go get out on the roads through the Middle East if the planning permit. Visiting refugee camps and minority groups. It is the refugees, mostly minority groups, with the real needs, I will prioritise. Not the economic. Meanwhile, until then I will continue my digging into Swedish domestic politics.

All contributions, big as small, are more than wellcome.