Investigating Sweden’s foreign aid and development policies is a deed that certainly doesn’t go unpunished. It’s like accusing Potiphar’s wife of infidelity. The Moral Superpower obviously considers itself above any suspicion of inconsistencies or wrong-doing in this field. Perhaps that’s why this investigation is especially necessary. And only a light scraping on the surface reveals troubling facts.

The Swedish political rhetoric when it comes to Israel–Palestine has long been supporting a two-state solution based on the 1967 borders. Such was also the message from Palestinian President Mahmoud Abbas at the last meeting of the UN Human Rights Council. The target of those uncompromising words was U.S. President Donald Trump, who is swaying regarding the solution to the Israeli-Palestinian conflict. According to leaked memos published by Foreign Policy, the U.S. administration is actually planning on boosting its aid to Gaza and the West Bank by 4.6 percent.

In 2014, Swedish Minister for Foreign Affairs Margot Wallström was behind the decision to formally recognize Palestine, justifying this by stating that it would facilitate the peace process towards a two-state solution. Today, Sweden’s relationship with Israel is at a freezing low. The Swedish Special Envoy will neither be invited nor accepted by Israel as a party to any types of negotiations. Even if Sweden would designate half of its Ministry for Foreign Affairs as special envoys to the Israeli-Palestinian conflict, nobody would be invited to talks that could potentially lead to progress. There’s good reason for this. In fact, Sweden’s foreign aid policies, baffling in their lack of democratic demands, could serve as a comprehensive explanation.

The question is also whether a basis to negotiate from even exists – Palestinian President Mahmoud Abbas has no negotiating mandate regarding what territories the Palestinians claim, since neither the Hamas nor Fatah have ratified and approved the Camp David Accords. Mahmoud Abbas knows that he will never be able to relinquish even one percent of Israel’s original territory. Not even his own organization will give him the mandate. For Mr. Abbas, there is no real option other than a Palestinian one-state solution. He knows that. And so does Ms. Wallström. And every single member of the foreign aid staff at the Swedish International Development Cooperation Agency, Sida, knows it too. After Camp David, consensus doesn’t even exist amongst the Palestinians regarding what territory they are claiming; what constitutes today’s Palestine.

Before the Six-Day War in 1967, the area now known as the West Bank was under Jordanian control. Jordan conquered this area when the Arab world rejected the United Nations division plan in 1947, which divided the British mandate into two states: a Jewish and an Arabic. Instead of accepting the plan and thus establishing a Palestinian state, the Palestinians, together with six Arab armies, invaded the newly established state of Israel with the intention of eradicating the Jews who lived there only three years after the end of the Nazi Holocaust.

After Jordan captured the West Bank in 1948, and until the area came under Israeli control in 1967 due to forced military self-defense during the Six-Day War, the matter of Palestinian independence was not even discussed in an international context. No peace conferences or UN resolutions ever urged Jordan to contribute to the establishment of a Palestinian state. Israel has expressed or accepted six peace proposals with the Palestinians: in 1937, 1947, 1967, 2000, 2008 and 2014. The Palestinian leadership has rejected every single one of them.

All can probably agree to the fact that the Palestinian people in Israel, Judea and Samaria, as well as on the Gaza Strip, are suffering. Israel, despite being the only Western-style democracy in the Middle East, is not a perfect democracy. The situation is especially difficult in East Jerusalem and Hebron, with repeated expropriations and expulsions of Palestinian landowners, who are replaced by settlers. There is a need for a strong rule of law, but in a non-territorial state (Palestinians have not defined this and even less ratified any peace process), the aid usually falls flat – or is usurped by ruthless, corrupt officials.

However, if one studies this particular organization more closely, a number of troubling facts arise. For example, in Article 27 of the PBA’s bylaws, its members are prohibited from cooperating with the State of Israel and with Israeli citizens. In 2015, Muhammad Halabi, who  stabbed two Israeli citizens to death, received a posthumous degree in Palestinian law from the PBA. Halabi was officially named by the PBA as a “heroic martyr.” The PBA declared itself to “stand with Muhammad Halabi.” The PBA’s 2016 graduation and induction ceremony came to be named in Muhammad Halabi’s honor for the murders that he had committed.

The PBA’s president, Hussein Shabaneh, has officially on several occasions signaled that the PBA will not recognize any Israeli territory between the Jordan River and the Mediterranean. In addition, the PBA has since 2013 received more than 22 million Euros, partly to further develop their activities but also to erect headquarters and court buildings. Why a bar association should be responsible for the construction of court buildings is another oddity, but may have some kind of logical explanation. Such as the non-existence of a formal state.

If a country claims to be part of a process leading to a two-state solution, but consistently works with those who don’t want to see a single Jew between the Jordan River and the Mediterranean, there are good reasons for international stakeholders to question the legitimacy of its involvement in the Israeli-Palestinian peace process. And this is the state of things that we must confront when it comes to Sweden’s role.

The question Swedes should ask themselves is why their country’s foreign policy leadership has chosen to support organizations such as the PBA, which hide behind the rhetoric of human rights but won’t allow a single Jew between the Mediterranean and the Jordan River. The Swedish Ministry for Foreign Affairs and the Swedish Development Cooperation Agency should be required to give a clear answer as to why such support would lead to a sustainable two-state solution.

A reasonable minimum requirement for the PBA and other Palestinian beneficiaries of any Western aid should be that they support a two-state solution based on the 1967 borders, such as the Camp David Accords. Both the Ministry for Foreign Affairs and the Swedish Development Cooperation Agency must explicitly state this in their requirements, in all contexts. This should be a non-negotiable condition.

Why Ms. Wallström refuses to include this essential requirement, only she knows. But it may be that there are other forces, both nestled inside the Swedish Ministry for Foreign Affairs, the Swedish Development Cooperation Agency and in different civil society development organizations, who, just like the PBA, don’t want to see a single Jew in what is today Israel, Judea and Samaria.

In Sweden’s development assistance to the Palestinian Authority, there are stakeholders and projects pointing in a totally opposite direction of Ms. Wallström’s pretty words about a two-state solution. A population and a diaspora marinated in Israel-bashing and Jew-hatred. All financed with Swedish and European aid money.

Could it be the case that behind all the talk of humanitarianism, a two-state solution and egalitarianism, an anti-Semitic culture is lurking? A culture that actually wants to exterminate every single Jew? A culture inside the Swedish aid industry consisting of barely veiled anti-Semites dressed up in the globalist costume of “do-gooders”; people who consider the PBA, with its explicit anti-Semitic agenda, and other beneficiary organization of Swedish aid, their natural allies? Who share the same worldview?

And should Swedish and European citizens be content with the fact that post-modern globalists, politicians and officials, are playing with forces who would like to see a new Holocaust – this time, funded with their own tax money?

The Palestinian Khaled Abu Toameh, an internationally renowned journalist and expert on the conflict who also happens to be Sunni Muslim and raised in the West Bank, summarizes the only reasonable way forward:

However, this is not the current path of the Swedish foreign aid industrial complex. Potiphar’s wife may not be questioned.

Regardless of whether she is leading us towards a new Holocaust or not. 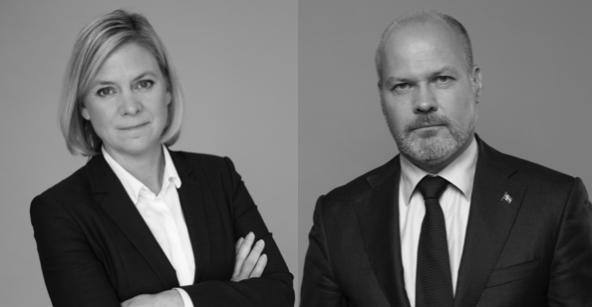 Blandat i regeringen Andersson I