Swedish current affairs magazine Världen Idag reports that the Foreign Ministry of Switzerland has decided to temporarily freeze the aid to the organization Human Rights and International Humanitarian Law Secretariat in Ramallah on the West Bank. Denmark has already halted assistance to the secretariat this summer, which is also funded by the Netherlands and Sweden. Sweden has played a key role in the creation of the Secretariat with a dedicated consul in Jerusalem. Even if the operations are now frozen or dismantled, this does not mean that they will cease. The Secretariat is likely to simply move while expanding its operations.

That the Secretariat’s funding is now withdrawn does not come as a surprise. The secretariat is one of the central hubs of the NGOs which Ledarsidorna.se previously has reported on. Three quarters of these recipients of Swedish aid, or 18 out of 24, do not recognize Israel, the two-state solution or the Camp David accords. Norway, which financed a youth center, previously condemned the secretariat’s activities and demanded a refund. PBA, the Palestinian Bar Association with headquarters in Gaza City and one of the beneficiaries, explicitly prohibits its members from having any contact with Israeli citizens or agencies.

It seems that involvement with the Secretariat has changed focus over time with the silent consent of the donors.

The tendency of the other countries to change their commitments has been verbally confirmed by reliable sources in Jerusalem and Tel Aviv. Israeli authorities have reacted sharply against Swedish government officials, among others, regarding the unacceptable behavior of the recipient organizations. Even if Israeli NGO Monitor has announced that Sweden also has frozen the aid, the Swedish MFA has not responded to Världen Idag’s questions if that is actually the case. The uncertainty may be due to the fact that the aid is managed by Sida, the Swedish International Development Cooperation Agency and that the MFA’s MENA or Foreign Aid units are not always informed of Sida’s decisions.

The Swedish silence may have an explanation. With the opening of the embassy in Beirut, Sweden is now in the process of building a new, similar activity. The embassy in Beirut is not an embassy focused on relations with Lebanon. The main part of the operation is focused on the situation in Syria with an annual aid budget of SEK 355 million (USD 44.5 million) and even though Damascus is designated as located within one of the safe zones In Syria, Sweden has chosen to place the embassy in Lebanon. That the embassy has a clear aid focus, and not a consular mission, becomes clear when looking at the staff. It is essentially staffed by Sida personnel, except for the ambassador. MFA staff are not even able to apply for the positions, which are reserved for Sida employees.

The changes in aid to the Human Rights and International Humanitarian Law Secretariat in Ramallah on the West Bank is followed by Hamas now carrying out several meetings in Beirut with representatives of the Iranian government and Hezbollah. Mousa Abu Marzouk, Deputy Chief of Hamas’s politburo, and Hassan Nasrallah, Secretary General of Hezbollah, met as late as June 14. The parties have now had three major, more formal meetings in 2017.

Hezbollah is a Shiite militia, supporter of Iran’s ayatollah Khomeini, which is trained, organized and funded by a contingent from Iran’s Revolutionary Guard. Iranian Revolutionary Guard members are present in camps around Lebanon. One of the camps, near Baalbek, is a fortress where no aid organization has ever set foot. Suffice to say, the Revolutionary Guard is present there. Hezbollah’s main goal is to eradicate what they consider to be Western colonialism in Lebanon. They want a one-state solution for Palestine as they see Israel as an illegal state formation and a non-nation — something they share with Hamas. The fact that Christians were present on Mount Lebanon for 2,000 years is nothing that the two parties attribute any significance to.

Al Monitor summarizes the profits for both parties. It is no secret that Hamas, despite being in a different position in the Syrian crisis, needs Hezbollah in terms of funding, training, safe delivery routes for weapons and opportunities to remain in Lebanon. Hezbollah, for its part, needs a Palestinian movement, such as Hamas, to restore its popularity in Arab public opinion; a position that has been lost after the involvement in the wars in Syria, Iraq and Yemen against Sunni Muslims. By approaching Hamas, which is a Sunni Muslim movement associated with the Muslim Brotherhood, this may help dispel Hezbollah’s sectarian image. The new rapprochement between Hamas and Hezbollah is supported by the regime in Tehran.

The fact that Hamas now freely moves about in Beirut cannot be said to be stabilizing in any way, shape or form. The Christians kicked Arafat and the PLO out in 1982 after they finally got tired of the destabilizing activities that the Palestinians brought to Mount Lebanon. Prior to the Palestinian presence in Lebanon, Muslims and Christians managed to live side by side. The Palestinians changed that. They are, for apparent reasons, not welcome back. Especially Hamas, with its strong ties to the Muslim Brotherhood, consistently harasses Copts and converts.

There are signs that the activity which Sweden initiated in Ramallah, among other places, and which now Norway, Denmark and Switzerland have pulled out from, demanding their funds be paid back, now has moved, resurrected and is about to expand operations in Beirut. Beirut is a significantly better location for those organizations that want to fly under the radar. The Lebanese state is weak and the peace agreement between the parties has drained primarily the Christian Falangists of their previous capacity. It is easier to engage in shady activities, such as encouraging cooperation between Hezbollah and Hamas, in Beirut than in Alexandria, Damascus, Ramallah or Gaza City.

In the program description for the newly opened Swedish embassy in Beirut, there are formulations that open for similar training activities to those funded within the framework for the Human Rights and International Humanitarian Law Secretariat in Ramallah.

Sweden’s approach to the axis Doha—Tehran—Ankara, or Qatar—Iran—Turkey, becomes logical with the tasks of the Swedish embassy in Beirut as well as the timely establishment of the mission. Ankara has no warm feelings towards Christians, who are seen as a threat to the coming resurrection of the Ottoman Empire. Anything that can threaten this, like acknowledging the genocide of Armenians, is to challenge Ankara. It is no coincidence that the Swedish government, despite earlier promises, has not yet recognized this. It would interfere with the harmony of the axis and the new cooperation between the countries; a collaboration that the Ministry of Foreign Affairs wants to be an active part of.

In the long-term, this axis has only three clearly stated goals:

The fact that Sweden consistently, for over a decade, has ended up in dubious or outright dangerous company is no news, as has been exposed earlier in the current affairs journal Dagens Samhälle. Unfortunately, for Kurds, Arab-speaking Christians and other non-Muslim minority groups in the MENA region, there is nothing to suggest a change in the course within the foreseeable future. Jews, Christians and Kurds are second-hand priorities for Swedish foreign policy; naturally, this will have real consequences for these groups. Not only in the Middle East, but also in the diaspora, as noted by the Swedish Institute for International Affairs.

Destabilizing activities like the Human Rights and International Humanitarian Law Secretariat In Ramallah on the West Bank may see its funds throttled in the short term, but similar activities seem to compensate for this through various collaborations and establishments in Beirut. This will have dire consequences for Christians, such as Copts, Chaldeans, Maronites and others, and not least for the Kurds. Not only the Jews have a target on their backs when the axis is strengthened.

An unholy axis that Sweden seems willing to be an active part of. 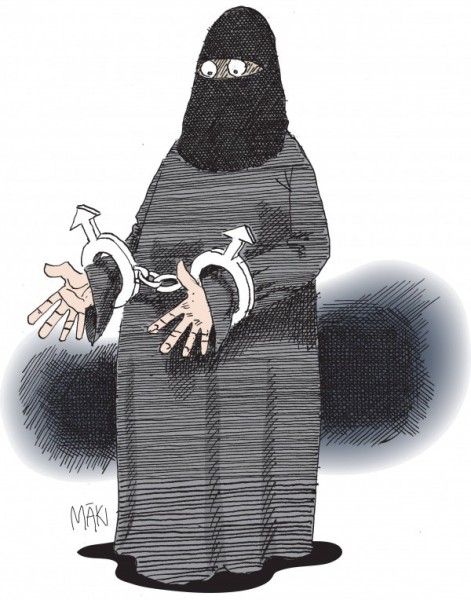